Why should we bother reading scholars who do not share our faith position? What conceptual ‘space’ can we appeal to in justifying our engagement with hostile, liberal and antagonistic theological voices? How are secular, unbelieving theologians able to say true things in their writings, aid us through their scholarship, and serve us through their endeavours?

Behind these questions stand a whole raft of interconnected theological convictions around issues like what it means to be made in God’s image, the role of general revelation, and our understanding of the impact of sin on us – especially in the arena of knowledge, spiritual discernment, and our capacity to discern truth.

This article highlights one theological issue that illuminates those opening questions – the doctrine of common grace. It briefly outlines the contours of this doctrine with reference to how this truth is elucidated in the writings of John Murray and then suggests some initial implications of this doctrine for theological study, especially in engagement with secular scholarship.

What is common grace?

‘…the term ‘common grace’ should … be defined as every favour of whatever kind or degree, falling short of salvation, which this undeserving and sin-cursed world enjoys at the hand of God.’ (John Murray, Collected Writings, Vol 2, 96).

Thus, is it gracious in that it comes to a sin-impacted world from the hand of a kind and generous God and common for it is widespread, universal, and multi-faceted.

Therefore, unbelievers are recipients of divine favour and goodness, unbelievers are capable of doing good, unbelievers receive some influence of the Spirit in connection with the ministry of the gospel and where civil government is established to punish evil and commend good.

Common grace should be distinguished from ‘special grace’ (connected with the experience of salvation) although there are many connections between the two and they mutually reinforce each other at significant points.

How does common grace relate to theological study?

Even though we distinguish between common grace and special grace – they are different in their natures, in their purpose, and in their effects – ‘we must beware of a false dualism whereby we incline to regard special grace as nullifying or annihilating the good things it finds in that sphere upon which it falls.’ (Murray, 117).

Grace does not obliterate nature, but rather renews it, thus ‘Christianity is not flight from nature; it is the renewal and sanctification of nature’ (Murray, 117).

So, an awareness of common grace should result, as Murray argues, in ‘a profound respect for, and appreciation of, every good and noble thing, and it is this philosophy and ethic that has made Christianity in its true expression a force in every department of legitimate human interest and vocation. Christianity, when true to its spirit has not been ascetic or monastic. Rather it has evaluated everything that is good and right as possessing the dignity of divine ordinance … it has appreciated the endless variety of human aptitude, skill, art, and vocation.’ (Murray, 117-118).

This posture does not deny the reality of human sinfulness but is explicitly concerned to not make ‘war on the good gifts and blessings, ordinances and institutions, of God’ (Murray, 118).

In terms of this antithesis, unbelievers have no true knowledge. But Scripture attributes knowledge to them in lesser senses. They know God from natural revelation, although they repress that knowledge (Rom. 1:18-21).’ This means, very practically that, ‘Christians can learn things from unbelievers. But they should always look at the teachings of unbelievers with an especially critical eye, for sin distorts the understanding of God and therefore of his world.’ (John Frame, Doctrine of God, 435).

Let’s try and summarise some implications from this:

1)      Read secular scholarship with a humility to learn and appropriate whatever truth is found there – because all truth is God’s truth and an expression of his common grace.

2)      Read secular scholars with an expectation that you can learn from them in profound and real ways – and thank God for his grace when you do.

3)      Read secular scholarship with a commitment not to be ungrateful for the good gifts of God you may experience in doing so.

5)      Read secular scholarship with the awareness that it could be wrong – because spiritual blindness is deep-seated in all of us.

6)      Read secular scholarship with a commitment not to be unaware how the human heart has the sinister potential to twist and abuse even the best of God’s gifts.

Why should we bother reading scholars who do not share our faith position? Because if we don’t, we may be showing ingratitude for God’s common grace expressed and experienced in their writings. Because all truth is God’s truth. Because we believe in and affirm the Lordship of Christ over every area of life – the life of believing and unbelieving thought in whatever sphere we encounter it in – and want to press as deeply into this liberating reality as is possible.

What do you make of the idea of ‘common grace’? Where do you see it playing out in everyday life?

How have you found reading theological scholarship from a variety of faith backgrounds, both Christian and secular? What has been your attitude towards secular scholarship?

How does understanding God’s ‘common grace’ allow you to engage positively with scholarship, regardless of the scholar who wrote it? What value is there in reading secular scholarship?

What are the dangers of ignoring theological voices outside of our own tradition?

What dangers are there when engaging with secular scholarship? How can we engage in a balanced way that recognises the positive contributions without accepting everything at face value? 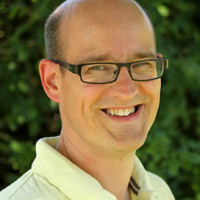 Jim is the UCCF Team Leader in the Midlands region. He holds a Masters degree in Historical and Systematic Theology from Westminster Theological Seminary in Philadelphia, USA.

View all resources by Jim Murkett